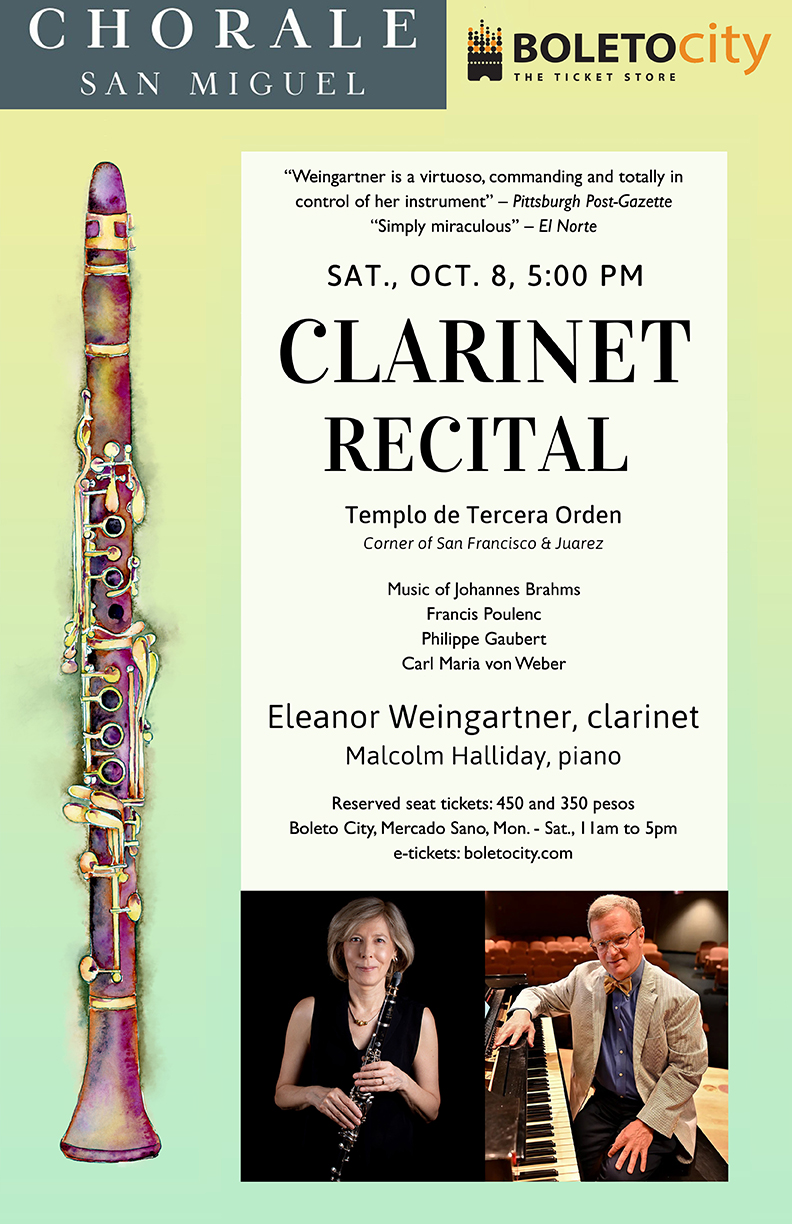 Eleanor Weingartner is a U.S.-born clarinetist living in Mexico. Of her playing, the Pittsburgh Post-Gazette wrote, “Weingartner is a virtuoso, commanding and totally in control of her instrument.” Clarinet magazine called her musicianship “especially lovely, featuring excellent control and tonal consistency.” El Norte, meanwhile, found her performance of the extended clarinet solo in Messiaen’s Quartet for the End of Time “simply miraculous,” adding, “She achieved wonders with its nuances and handled the dynamics breathtakingly.”

Weingartner is principal clarinet of Mexico’s National Symphony Orchestra (OSN) and a founding member of the wind octet Sinfonietta Ventus. She most recently performed in San Miguel last April in the chamber ensemble that accompanied the silent movie The Passion of Joan of Arc at Bellas Artes. She is making her San Miguel solo debut, with Malcolm Halliday on piano, on Saturday, October 8, at 5pm, at the Templo de Tercera Orden, the 17th century Franciscan sanctuary on the corner of San Francisco and Juarez. The temple has wonderful acoustics and sight lines.

The concert will feature German and French repertoire. The German works are Johannes Brahms’ masterly Sonata in E flat major for clarinet and piano, his final chamber music composition, and Carl Maria von Weber’s delightful Grand Duo Concertante. The French compositions are Francis Poulenc’s Sonata for Clarinet and Piano, and the Fantaisie for Clarinet and Piano by Philippe Gaubert, an early 20th century work influenced by Ravel. Proceeds of the concert will benefit the Chorale San Miguel project to install an 1875 pipe organ in the Tercera Orden chapel.

ALL PRICES IN MEXICAN PESOS

Top
Share this ArticleLike this article? Email it to a friend!
Email sent!